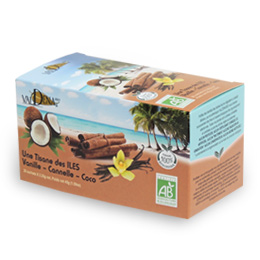 Exotic blend of Coconut, Cinnamon and Vanilla straight from Madagascar. Based on 1oo% organic fruits. This blend is recommended as an ice tea summer beverage.

Cinnamon – Known for its unique taste and flavor, has a warming effect as well. In the kitchen, it is used to enrich cakes, deserts and ethnic dishes.

Vanilla – One of the most expensive spices in the world, due to its long process of production and Manufacturing. In the kitchen Vanilla is used for baking and ice creams. Known as a passion stimulant.

Try to use this infusion in cakes and other deserts.