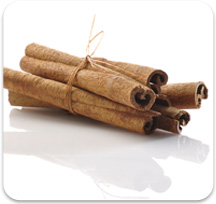 (CINNAMONIUM REGLANICUM)
In ancient times, cinnamon was used for religious rituals. It warms the organism and is recommended in the case of chills, colds and the flu, often in combination with ginger. It also stimulates blood circulation and the circulatory functions, relieves digestive problems (diarrhoea, nausea, etc.). To be used in convalescence (asthenia) and to promote the occurrence of menstrual periods. As an oestrogen stimulant, it is considered a female aphrodisiac.

You can find Cinnamon in these teas